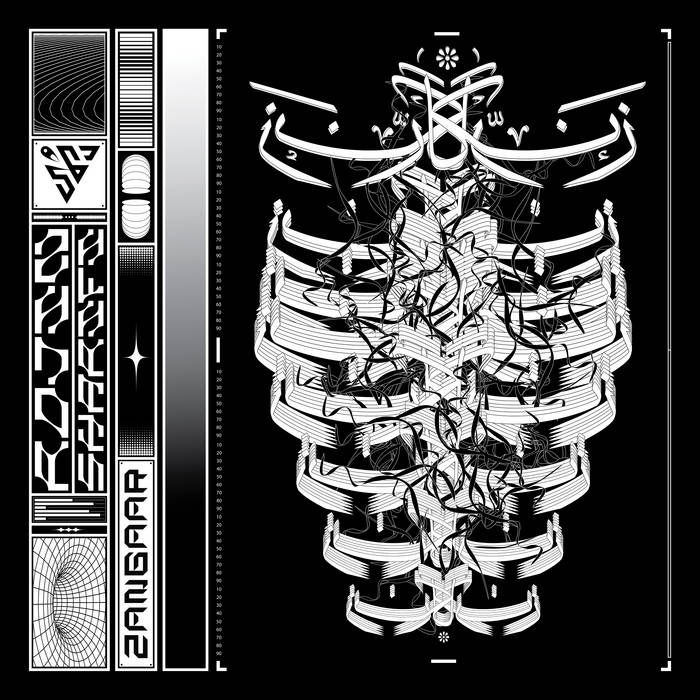 Zangaar is the dust of time that covers memories and mirrors. It makes, thus, a new abstract surface, a new quality of time. Zangaar is formed by a reaction between literature and sound, copper and oxygen, mirror and reflection.

Looking back to the stories, situations and states, while “Zangaar” covers their surfaces, it pushes you to find a new way of narrating: describing an abstract image and situation while a story is taking place in the background.

The poems were written during a summer trip. These intimate stories have been transformed into sonic experiences connected by a blue- greenish thread.

1. Boloor  - One lets go to the calm sea, allowing the waves to seesaw. Another comes, and like light shining through a crystal, an explosion occurs. Light shatters into golden pieces, and the sea becomes ferocious. An attraction pulls them together. Like fish in water, moving and turning, dashing and jumping, they stretch and bend in unison.

2. Ghaaf Kaaf Gaaf -  “you see the map from above/ we, in a lake/ in two parallel worlds/ with winds from three different directions/ on pieces of wood -boat-” Two people want to be with each other, but their decisions separate them. They aren’t willing to take the risk, and it takes courage to lose something--someone--so precious.

3. Khesh  - Khesh brings back to life the forgotten memories of the past. Each connection and relationship had a farewell, but the memories of those relationships are reflected in mind, over and over again. As memories fade into the imagination, the present moment, the now, takes charge of telling the fate of the past. Khesh is the repeated erasure and re- awakening of memories.

4. Pedarkosh -i  Battles between fathers and sons is a repeated theme in the Iranian history and literature. The current generation, the spectator, merely stares in dismay. They see the destruction left behind yet unable to move in any direction.

5. Baadaabaad  - Baadaabaad depicts the connection between four elements over time: a homeowner, an abandoned house, a cat, and us, the witness. The apathy of time and witnesses towards the events makes the past seem insignificant. Memories that occurred in the house are remembered and cherished, but our silence fades away the death of the homeowner.

6. Choruk  - A still image of the sea--a calm sea--the sun beating down on this lazy shore. Conversely, a conversation between two people is taking place. One speaks of the glass ceiling, and the other, seeing the threat and the struggle, stays indifferent. Choruk is the dichotomy between what seems to be a calm environment and the human struggle for equality.

7. Bi Oo -  A group goes hiking in the mountains, and one person disappears. They search the mountains, but they are no where to be found. Years pass and the lost person reappears walking down the street with a newspaper in hand. Forgive me; is that really you? It’s like finding someone in a parallel universe.

8. Toom -  “I said, my only anguish is genre / breaking it” Toom is a battle: the inner battle within one’s self; and the battle with another person. Time brings upon change, and accepting those changes is a constant battle.

Rojin Sharafi is a sound artist and composer of acoustic, electro-acoustic and electronic music based in Vienna.

She has been working on different multimedia art projects and has been collaborated with different musicians, Ensembles, filmmakers, video-artists and performers.

Her music passes the borders of genre, while borrowing some elements from different epoch and classes such as Noise, Folk, Ambient, Metal and contemporary music. Fusion texture, narrative layers and formalistic approaches are her musical trademarks.

Her creation process and pre-production include: studies on concept, searching and collecting sound material, improvising with instruments in a group or in solo, working on the texture, experimenting with form and sketching the structural process, recording in studio and realizing the final production.

She was born in 1995 in Tehran. She is currently studying sound engineering and composition at university of music and preforming art Vienna.

A label focusing on Experimental Electronic Music by Iranian Composers.

Curated by Ata 'Sote' Ebtekar and produced by Opal Tapes.

All parcels default shipping prices are for international economy (surface mail). If you want your parcel sent via airmail please contact us after you have purchased so we can let you know the extra payment required for airmail. ... more

Bandcamp Daily  your guide to the world of Bandcamp

Featured sounds by K.Spark and WIZDUMB, plus Basi joins the show to discuss his latest release.